Enlightoons came out of an inspiration to bring humor and light into others’ lives. While enjoying cartoon blogs in 2003, Artist and Writer Stu Rosen said to himself, “I can do that”… then heard a very loud voice in his head asking, “So why don’t you?”

The cartoons were very small, and known simply as “GuruStu” from 2003 until Aug 2009, when they were renamed “Enlightoons” and took on the larger format you see here.

These ‘toons are often based on real conversations, so be careful what you say 🙂 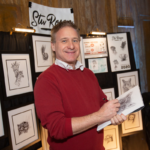 While other kids were getting up early on Saturday morning to watch cartoons, I was busy drawing them.

Art has always been a major part of my life. I earned a degree in Commercial Art and spent some time as a professional cartoonist for Broadway Magazine in New York City.

I moved to Hollywood to pursue acting and motivational speaking and became known as “GuruStu”, with books, speaking gigs and podcasts.

That’s one of the many hats I wear. I have a successful career as a video producer and graphic designer. Two years ago I began drawing wild animals in ballpoint pen and have done art shows in Downtown LA and Beverly Hills, as well as having my art in galleries from Washington State to Laguna Beach, CA. You can see more of that work at StuRosenArt.com.

If you like these toons, you're going to love the books!

Get Enlightoon Up Volume 1 and Volume 2 now available on Amazon.com


Get your toon up today!

Toon Up your Inbox

Scroll back to top